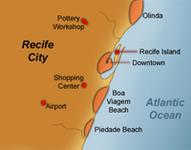 Recife is geographically located on the Atlantic coast where the rivers Capibaribe, Beberibe and Jordão unite and flow into the ocean. Most of the city is about two metres above sea level, excluding some parts. Its islands, mangroves, beaches and the coral reefs are its main attractions, as well as a vital part of its geography.

Brazil is known for its tropical rainforests. These forests are distinguished by high rainfall, variety in vegetation and animal species. The rainforests in Recife receive an average of 1700-2000 mm of rainfall every year. Soil is poor in these forests as the nutrients get washed away to heavy rainfall. The trees in such rainforests are uncommon of other forests in terms of features. The whole of Recife is formed due to the combination of three islands, namely, Santo Antônio, Boa Vista and proper Recife. The rivers Capibaribe and Beberibe flow between these islands. Recife city is characterized by its surrounding coral reefs and white sandy beaches. 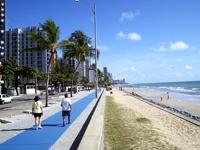 Average temperature per month in Recife:

Average rainfall per month in Recife: